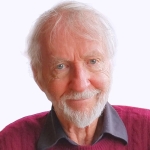 Beloved husband, father, treasured friend and master illustrator David passed serenely in his sleep at home with family, after a short and aggressive brain cancer.

David was an active artist, and member of the Santa Barbara Art Association where he served on the Board. His many exhibits and juried shows from the 1960’s until his passing, explored a vast spectrum of styles. “Form is Emptiness” created during his final days, was featured in the August exhibit of Santa Barbara’s Gallery 113.

His career as an artist and Scientific Illustrator began at Scripps Institution of Oceanography, La Jolla, California in 1962, following his marriage to Margaret. In 1971 he joined the UC Santa Barbara Department of Earth Sciences, retiring in 1991 as Senior Scientific Illustrator. Notable exhibits throughout his career include the traveling exhibit “Art and Science, Perfectly Beautiful” sponsored by the Smithsonian Institution, Washington, D.C. Other exhibits include Westmont College, UC Riverside, Concordia University Irvine, Cedar City Utah, Pend Oreille Art Council Artwalk Sand Point, Idaho, and the Santa Barbara Museum of Natural History in the 1980’s. His paintings and drawings are in private collections in Australia, Germany, Austria, Canada, across the United States and in publications including the Yale University Press.

This statement about art was indicative of his philosophy about creativity, ability and expression in his work:
“Whether it combines with color or black ink, there is only the brush stroke.”

David served as a Unit Supply Specialist in the U.S Army during the Korean War, February 1953 to February 1956.

For more about this remarkable life, and to visit a Forum where you’re warmly invited to share your own memories, please start at this shortcut link: https://goo.gl/dxhQ3e

Donations to cancer research or to hospice in David’s memory will be greatly appreciated.
https://ridleytreecc.org
http://www.vnhcsb.org

First Things First - Click to see the Words & Pictures posts displayed in the sequence they were added, oldest first.